The new polyfunctional DRN building was built on the corner of Národní třída and Mikulandská street. SEBRE group, the investor behind the whole project, worked with architect Stanislav Fiala, who intertwined the baroque Schönkirchov Palace in Mikulandská street with the new DRN building at Národní Třída. The building is located in the historical center of Prague, which combines different architectural styles from baroque through constructivism up to the contemporary style. The construction of DRN, which is significantly covered by greenery, took five years and cost 1.5 billion CZK. The building will be used for offices, galleries, a restaurant and a coffee shop. The final inspection of the building took place on 21 September 2017.

The construction project for the polyfunctional DRN building by the SEBRE group has passed its final building inspection. Five years have passed between SEBRE’s purchase of the plot at Národní třída including the adjacent Schönkirchov Palace in Mikulandská street from DITRICH in 2012 and the former parking plot being replaced by a corner building covered with flowers and trees. The premises have been left empty for decades and now the building forms another addition to the bustling Národní třída. 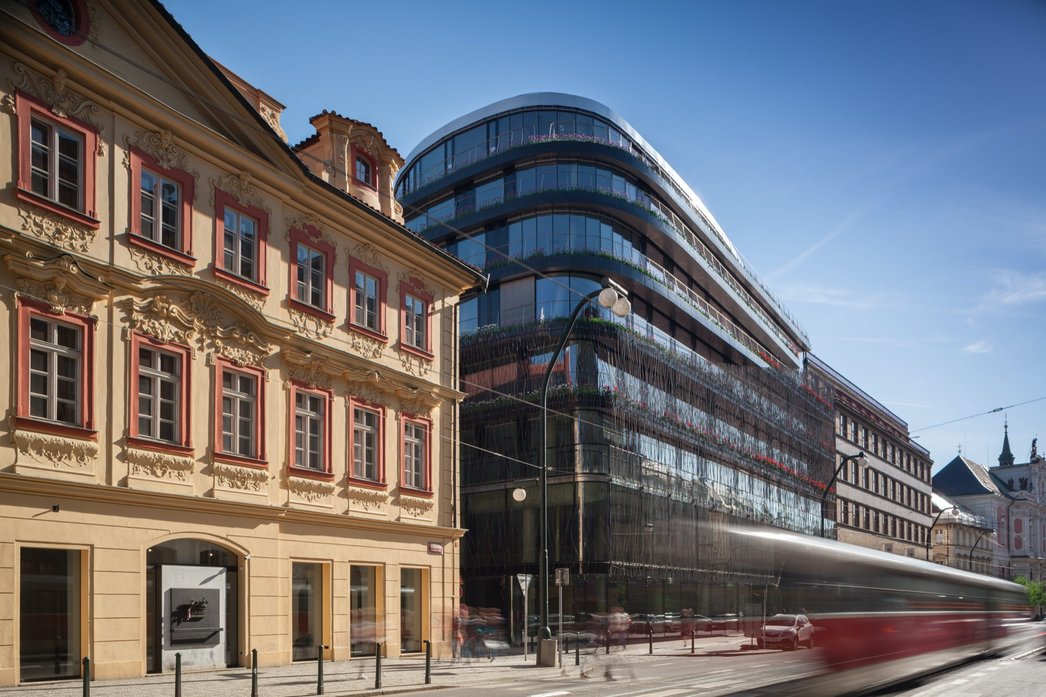 In 2012 SEBRE commenced the construction work in accordance with the original project of 2007, which that planned to use the building as a hotel complex. During excavation works and the archeological survey, SEBRE changed the original plan and reached out to architect Stanislav Fiala. Historical painted ceilings and murals were discovered in the otherwise dilapidated baroque palace. “Stanislav Fiala was an obvious choice for us because he can combine two seemingly incompatible things in harmony; in this example a dilapidated baroque palace was to become a proud part of the project that would surround it from all sides,” explained Jan Kubíček, CEO of SEBRE. According to the architect, respecting the history was an important parameter for the new design. That is also why the Schönkirchov palace was restored using a so-called analytical method which to a significant degree acknowledges that time has left its mark and respects the historical appearance of the original building. 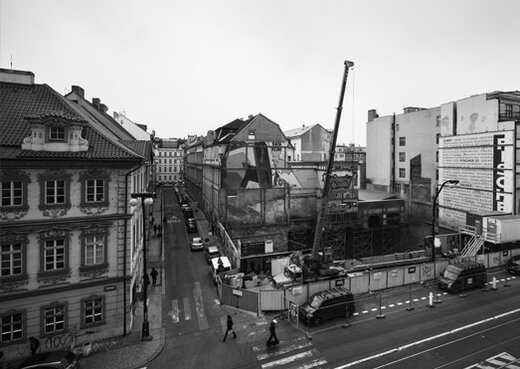 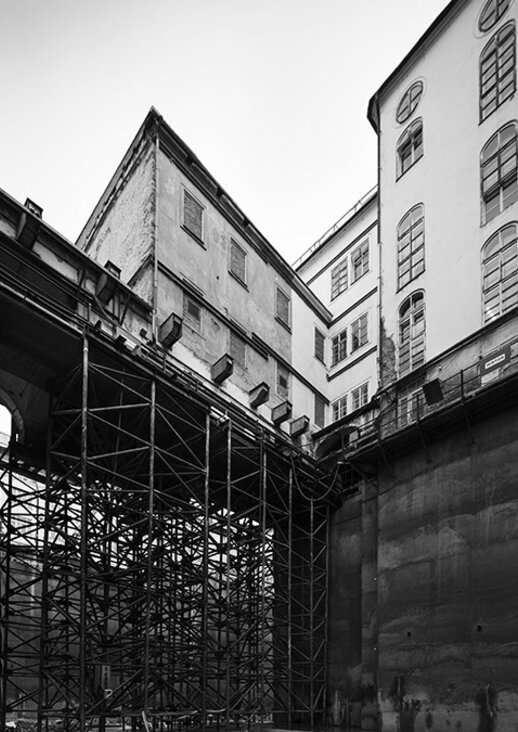 Preserving the historical heritage was not the only link between the old and the new building. According to architect Fiala, the most challenging task was how to handle the different heights and style of surrounding buildings in Národní třída. “There are two worlds between the Danube Palace and Kaňkovský palace. A high one and a low one. Our baroque Schönkirchov palace that was part of the plot became a sort of a companion with which we the new building structure had to get along.” The heritage of the adjacent palace and the return to history are reflected in the new DRN building in several ways.

The suitable use of material was one of the ways of how to combine the old building with the new “Material has memory and I wanted to preserve this history and breathe it into the new building,” explains Fiala. The material types of both buildings are combined, either literally or figuratively. For example, the architect used old pantiles and stone lintel from the old building and inserted them into concrete. The echo of time was reflected by replicas of old, baroque-shaped jambs imprinted into the concrete frame.

Fiala managed to incorporate the playfulness of baroque into the new building using a decorative secondary façade that is made of metal rods. These symbolize baroque decorativeness and correspond to the surrounding decorated houses that are full of adornments on the façade, rails and balconies. “The rods are made of stainless steel, which we baked to create a material similar to copper, reminiscent of historical bars. The bars run from the Danube Palace ledge along the arch down across the corner and connects to the ledge of the Schönkirchov palace, which is very low. Copying the mansard baroque roof draws it close, so that for a moment it acts as a continuation of the mansard roof and then it gradually fades away,” Fiala described how he interconnected two buildings of a different height and style.

The connection is obvious also around the parterre. Arcades in the courtyard are accessible from Národní třída and from Mikulandská street. The dominant feature of the courtyard is a monumental statue designed by Fiala and made by Josef Ryšavý from baked stainless steel, just like the bars on the façade. 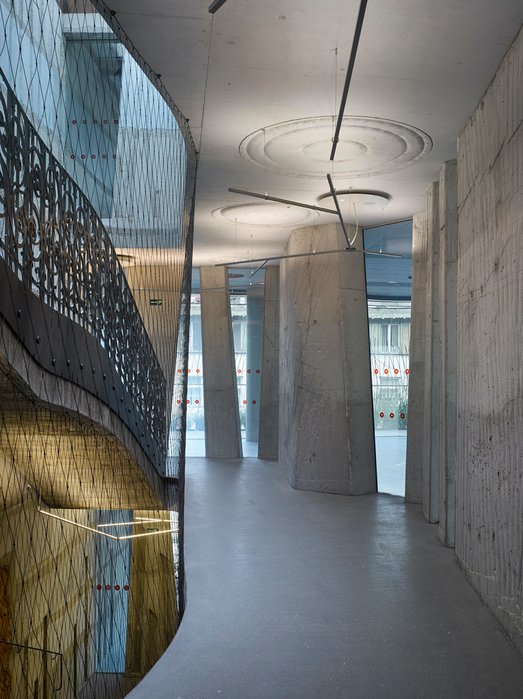 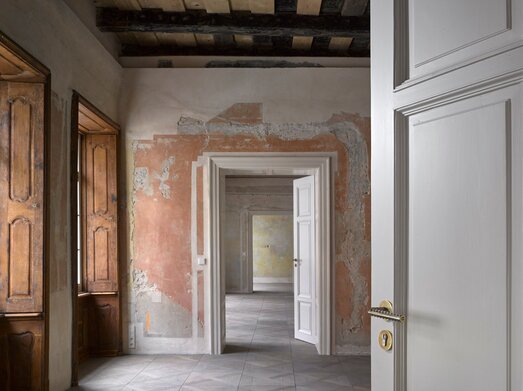 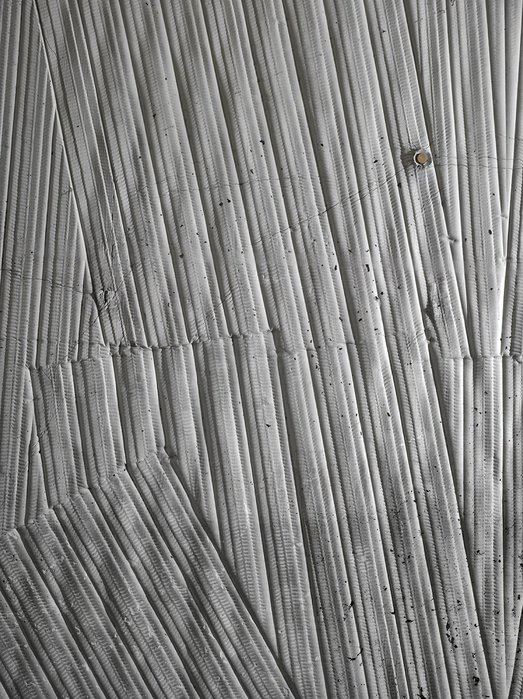 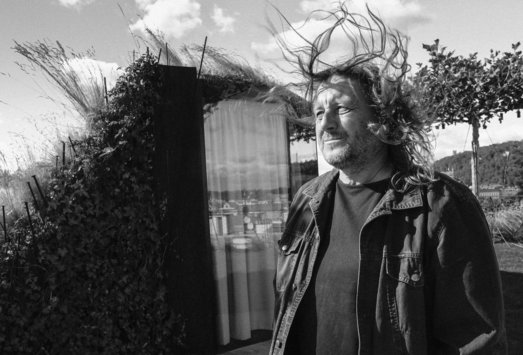 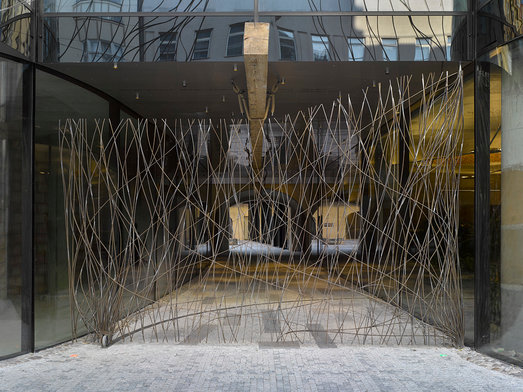 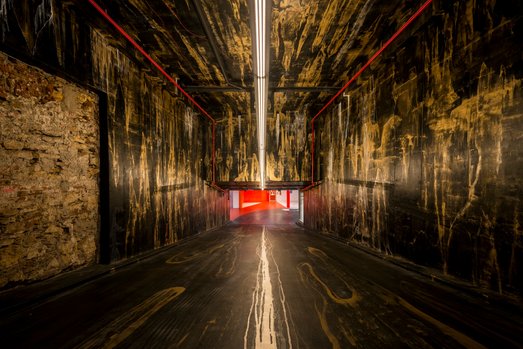 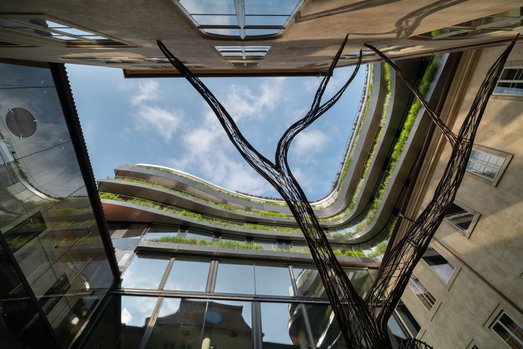 „Material has memory and I wanted to preserve this history and breathe it into the new building.”

/ Stanislav Fiala, author of the building

DRN (turf in Czech) represents the effort to bring more life and greenery into Národní třída. The whole house has been planted with tassel grass on several levels. The reference to the fairly recent history of Národní třída comes to life for one month each year, when the green balcony containing not only grass but also Spring bulbs blossoms in red-blue-white tulips and the DRN galleries transform into a flowery Czech flag, a design by Jan Kocourek.
As the height increases, the building leans away, layer by layer, and the floors form a pyramid like contour lines, complete with a garden and full-grown plane trees on the top roof. DRN therefore brings greenery to Národní třída that was practically missing in this part of Prague as of the time of its construction. 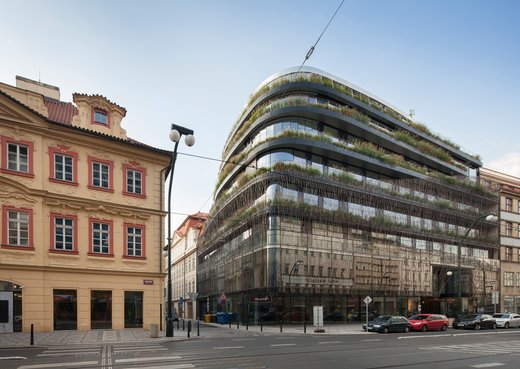 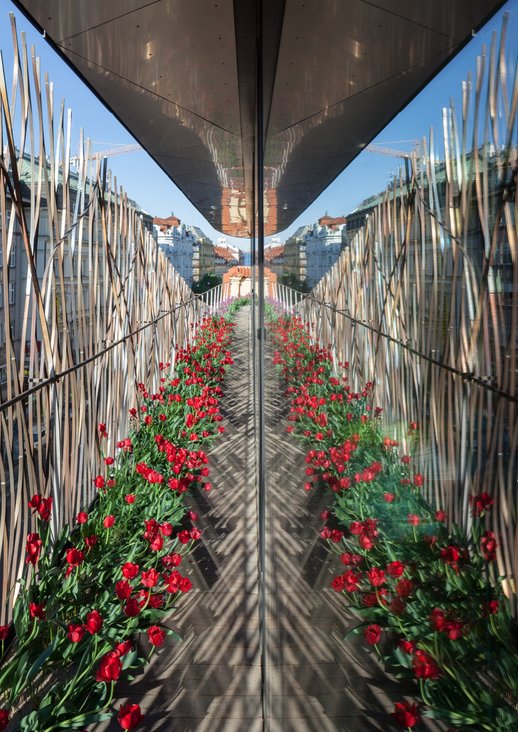 DRN is primarily intended as office premises. There are four parking levels, decorated by artistic entrances by painter Patrik Hábl. There is also a restaurant, coffee shop, gallery and beerhouse in the building. According to Jan Kubíček, 40% of the building is currently leased. “Retail premises have been filled completely by leaders in their respective fields, such as Zdeněk Sklenář Gallery, Petra Měchurová Studio, as well as the new concept of L'osteria restaurants which will open a two-story restaurant in the interior courtyard specializing in Italian cuisine and, last but not least, the new U Rarášků pub that follows up on the traditional Czech beer culture in a modern way. The office areas will be used by international pharmaceutical company SHIRE and Czech IT company NANO Energies.” 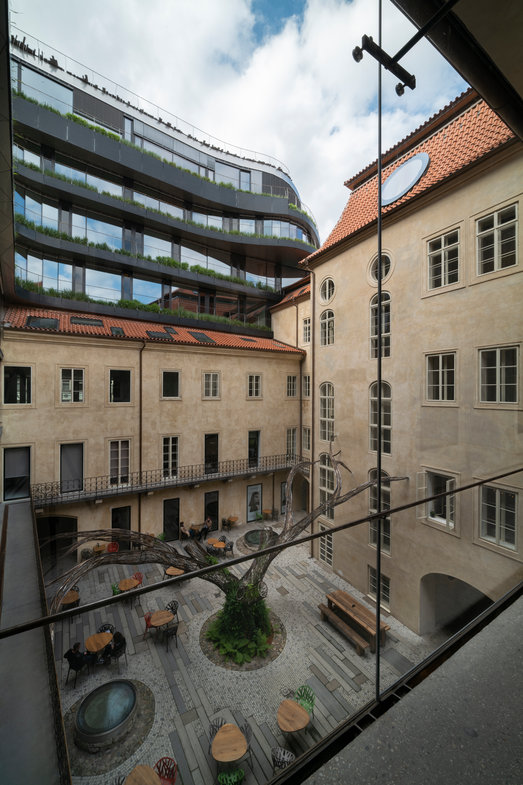 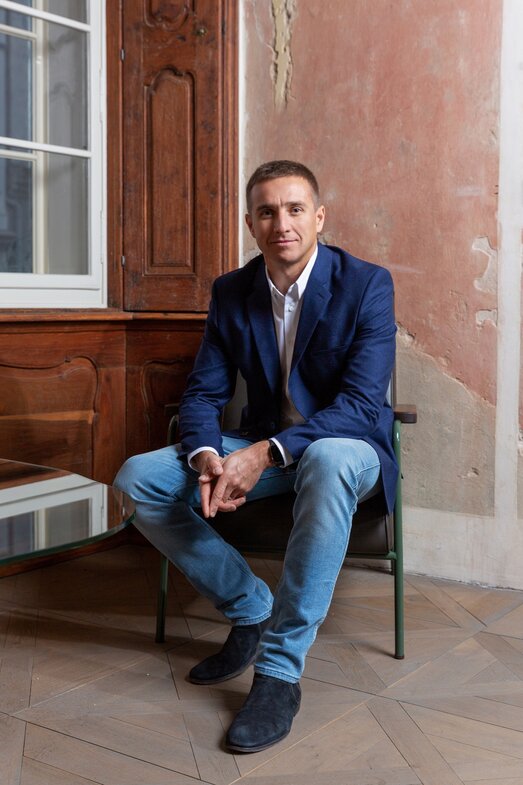 „Retail premises have been filled completely by leaders in their respective fields, such as Zdeněk Sklenář Gallery, Petra Měchurová Studio, as well as the new concept of L'osteria restaurants which will open a two-story restaurant in the interior courtyard specializing in Italian cuisine and, last but not least, the new U Rarášků pub that follows up on the traditional Czech beer culture in a modern way. The office areas will be used by international pharmaceutical company SHIRE and Czech IT company NANO Energies.” 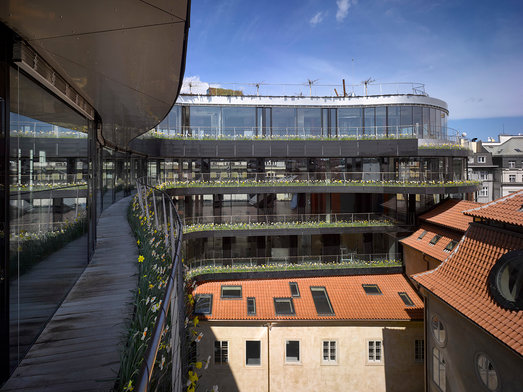 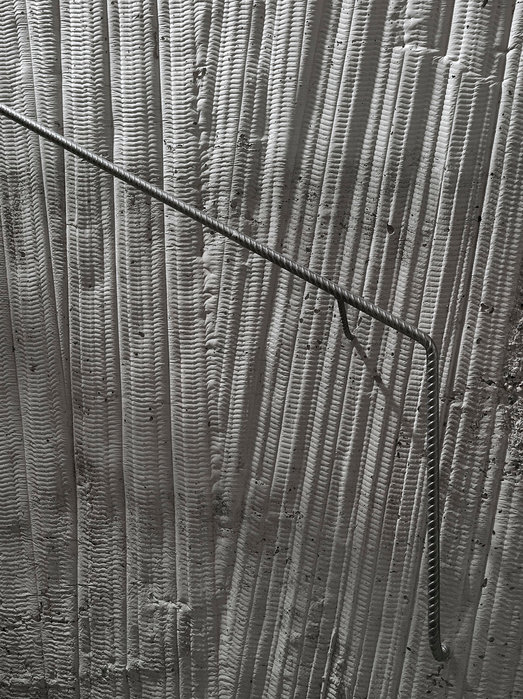 The SEBRE investment group was founded in 2013. It is managed by its chief executive officer Jan Kubíček.
SEBRE is active in several areas, including Development, Gastronomy, and Cinematography. In Prague, the capital of the Czech Republic, it is currently building two administrative buildings, and in Belgrade it is finishing an apartment building. As far as gastronomy is concerned, it is the exclusive distributor for Pilsner Urquell Brewery, a.s., in Serbia and one the investors of Pivnica Gvožđara 1870. In cinematography it is newly entering into the AVALA film studios in Belgrade.