“Červený Jelen (Red Deer) is not just one of many projects, it is indeed the best project I have worked on in my life. I experienced, and was enriched by, the everyday geniality of Stanislav Fiala and the designing and building professionality of the team of SEBRE and HINTON. All this was topped off by the superior conceptual gastronomy know-how of German Food Expert group with Patrik Jaroš and the dynamics of the team of Hospodska. Eleven months from the first idea to opening. Unbelievable! I am glad and honoured to be a part of it. Values, quality, honesty, diligence, and ardour. That defines modern business.”

a pub with 700 seats at Sporck Palace in Prague, Czech Republic

Červený Jelen is a pub located in in the building of the former Anglo-Czechoslovak Bank, occupying its vault, bank hall, and piano nobile, where the bank management once resided. It was designed in the 1920sby famous architect Josef Gočár. The building is located in Hybernská street in the place of Baroque Sweerts-Sporck Palace. The contemporary architectural concept of Stanislav Fiala works with references to Cubism, which made Gočár famous. The Cubist-shaped cut in the ceiling of the former vault created an open interconnection of all floors. They arerun through which a tank tower with 12 copper beer tanks fitted to rails found on the site during the reconstruction.

The quality dishes served there are rendered by a team led by chefs Patrik Jaroš and Marek Fichtner. The name of the pub itself, the red deer figures by sculptor Gabriel guiding visitors to the pub through so-called St. Hubertus’ alley, the interior paintings by Patrik Hábl, the red antlers by girdler Josef Ryšlavý and other details found all over Sporck Palace, all these are references to Count Sporck, the original owner of the palace, founder of the Czech hunting tradition, and patron of the arts. 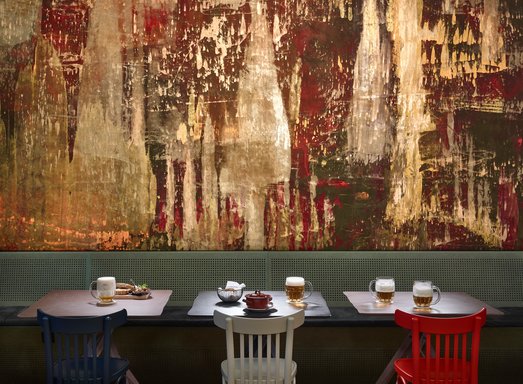 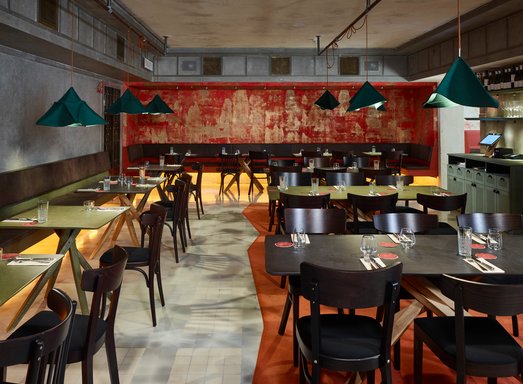 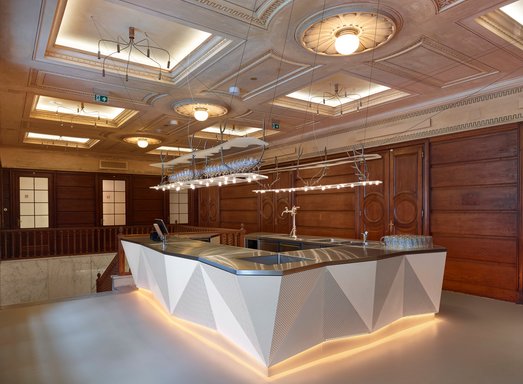 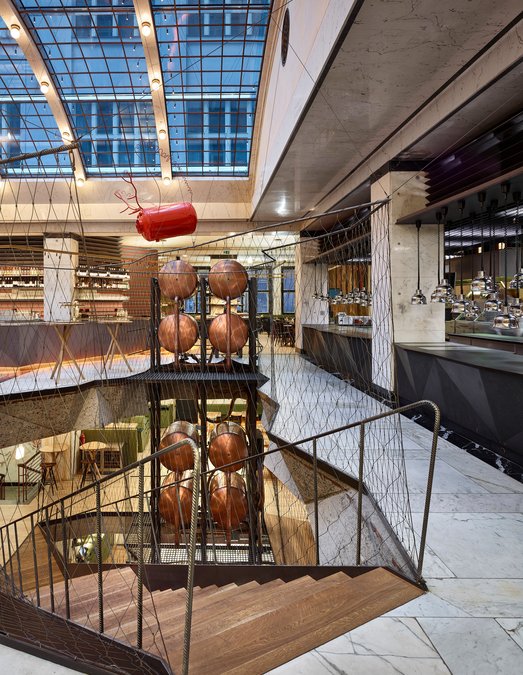 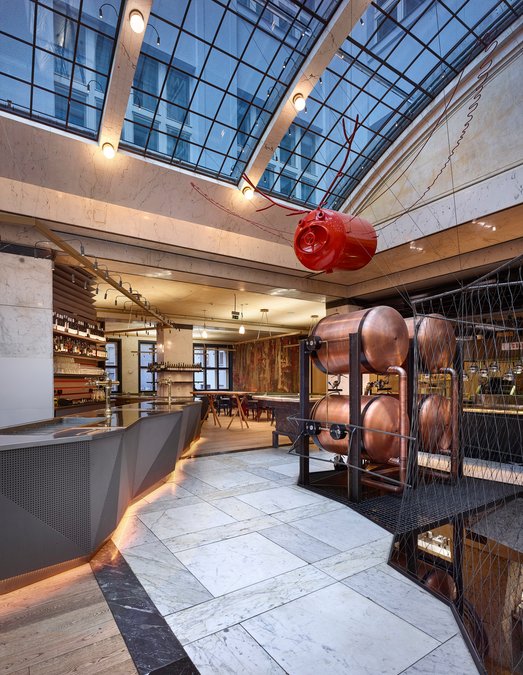 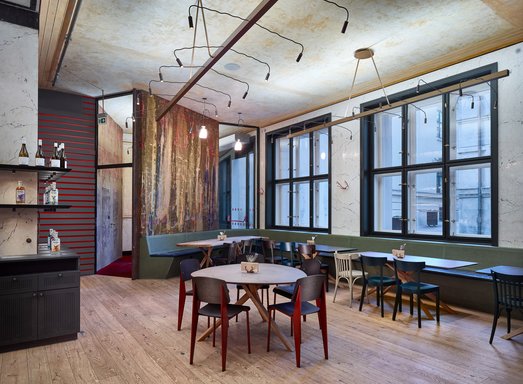 TRANSFORMATIONS OF THE PLACE

The original Swéerts-Sporck Palace was a complex of two buildings with their frontages facing Hybernská street and the rears turned to V Celnici street. The three-storey building on the left (3 Hybernská street) was built between 1694 and 1699 after the design of Jean-Baptiste Mathey.

In 1783, the building on the left was rebuilt by Antonín Haffenecker in the Neo-classicist style. The two-storey Neo-classicist building on the right (5 Hybernská street) was built in 1790 after the design of Jan Nepomuk Palliardi. The unified art design of both buildings is the result of their sculptural and plasterwork decoration by famous Czech sculptor Ignác František Platzer.

In 1923, the Anglo-Czechoslovak Bank, which  bought the buildings in the beginning  of the 20th century, had two new administrative wings built after the design of Karel Jarray.

During the very same year, the construction of the main building (5 Hybernská street) including the bank hall and vault begun after the design of famous architect Josef Gočár. Leaving only the original façade, he created a significantly higher Constructivist building behind it with a dynamically shaped frontispiece. The building was finished in 1925.

The bank lost its real property due to WW2. During the time of the Protectorate, the Gestapo was seated in the building.

In 1948, the buildings were nationalized by Communists, who located their local secretariat there.

In May 1958, the buildings  became listed protected buildings. During the following decades, they were owned by various institutions which all adapted the interiors very insensitively.

In 2008, Czech Railways started offering the complex of buildings at 5 Hybernská street in repeated auctions. In 2011, in the sixth auction, the complex was bought by SEBRE.

In 2019, Červený Jelen pub was open in the space of the former bank hall and vault, which meant the completion of the reconstruction and, to a certain level, conversion of Sporck Palace. 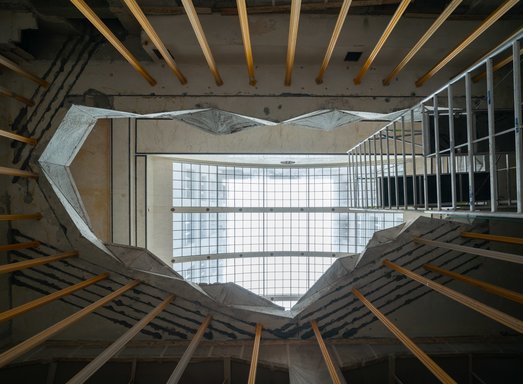 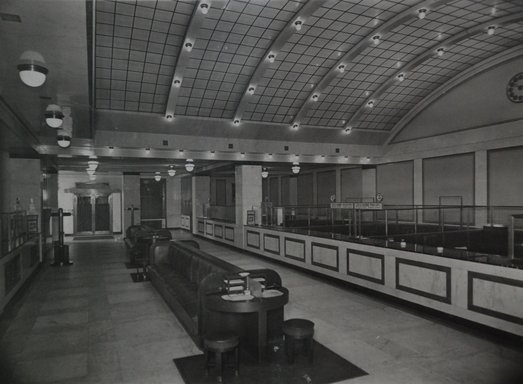 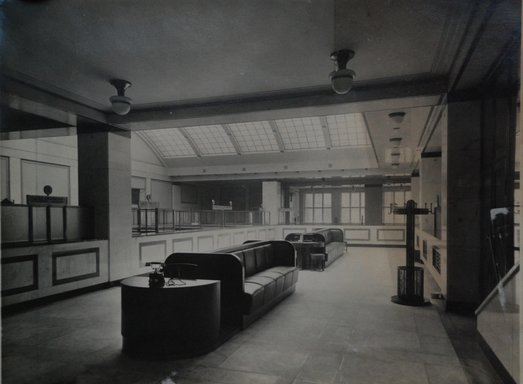 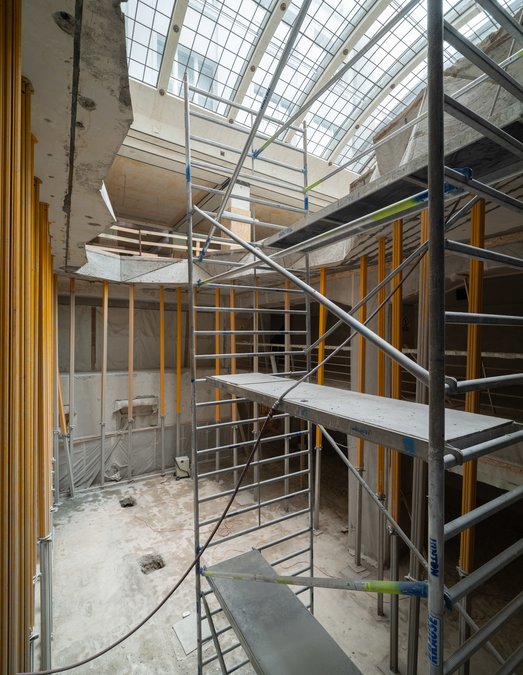 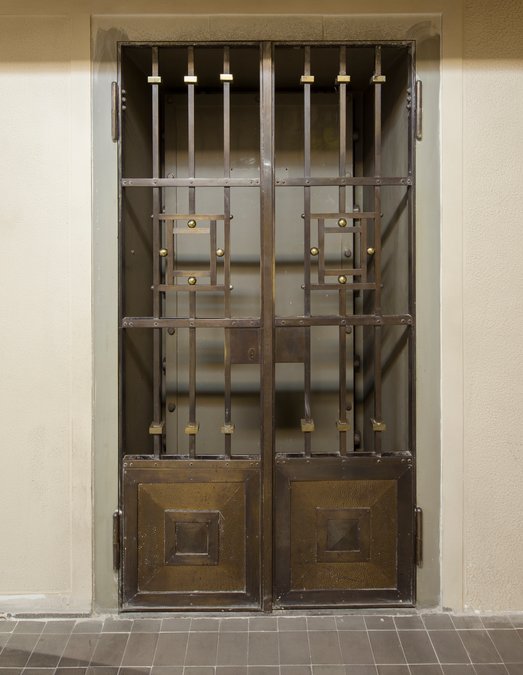 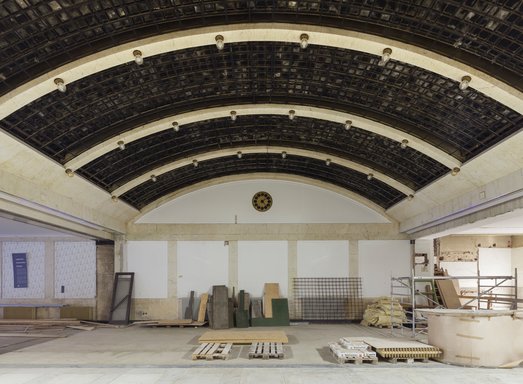 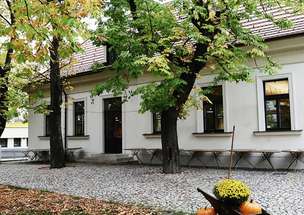 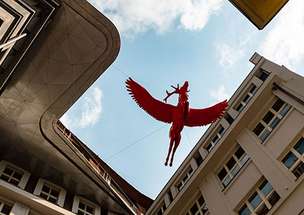 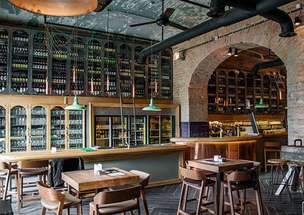